What is an X-ray?

An X-ray is a form of electromagnetic radiation of the same form as visible light, but of an extremely short wavelength (less than 100 angstroms). X-rays have the property of acting on photographic plate to produce images.

For this reason: X-rays can be used to generate pictures "through" a solid object, e.g. allowing inspection of the contents of a suitcase or visualization of the interior of a patient's body.

X-ray images are two-dimensional, which means that depth information is lost. Also, X-ray photography cannot distinguish between two objects of the same density (both will appear as the same brightness on the photographic image).

Repeated or high-level exposure to X-rays and other radiation can damage cells in the body by damaging DNA and inhibiting the ability of cells' to reproduce.

For this reason: targeted exposure to radiation is used to inhibit growth of tumors in some cancer patients.

Current techniques including Computed tomography (CT) make use of X-rays to construct detailed images of the interior of the body and brain. 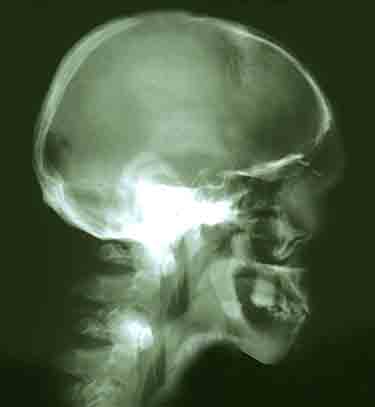